The Air Force Research Laboratory (AFRL) of the United States Air Force Materiel Command has conducted an industry search for rain erosion coatings and published its findings in May 2017.  Among the 11 coating systems tested, two Hontek coating systems ranked as the best two, with rain erosion resistance far better than the rest of competitive products.

The followings are the screenshots of the AFRL Final Report, entitled “Erosion Resistant Protective Systems- Phase II Final Report”, which was approved for public release. 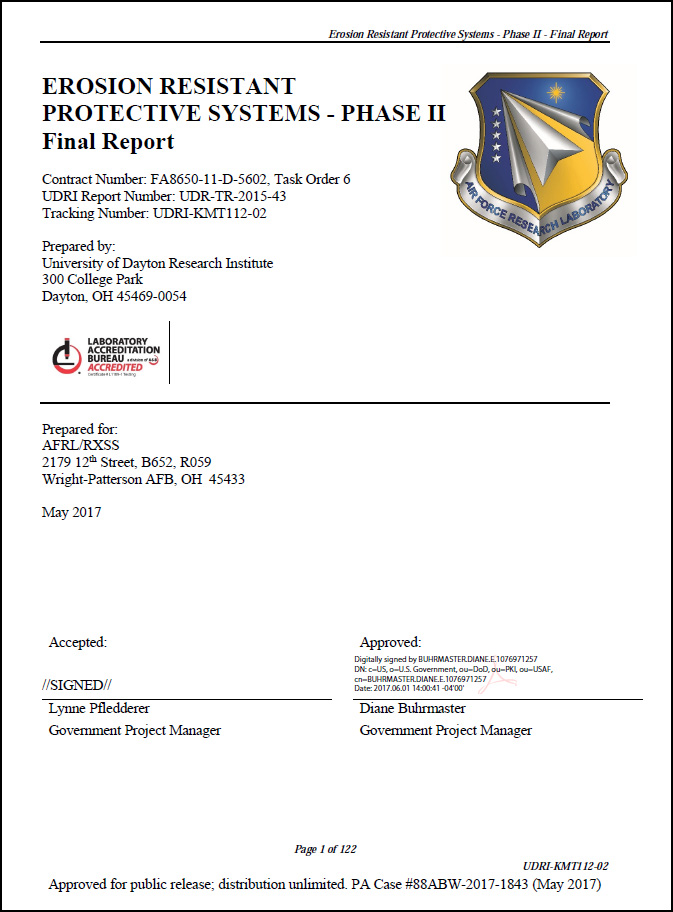 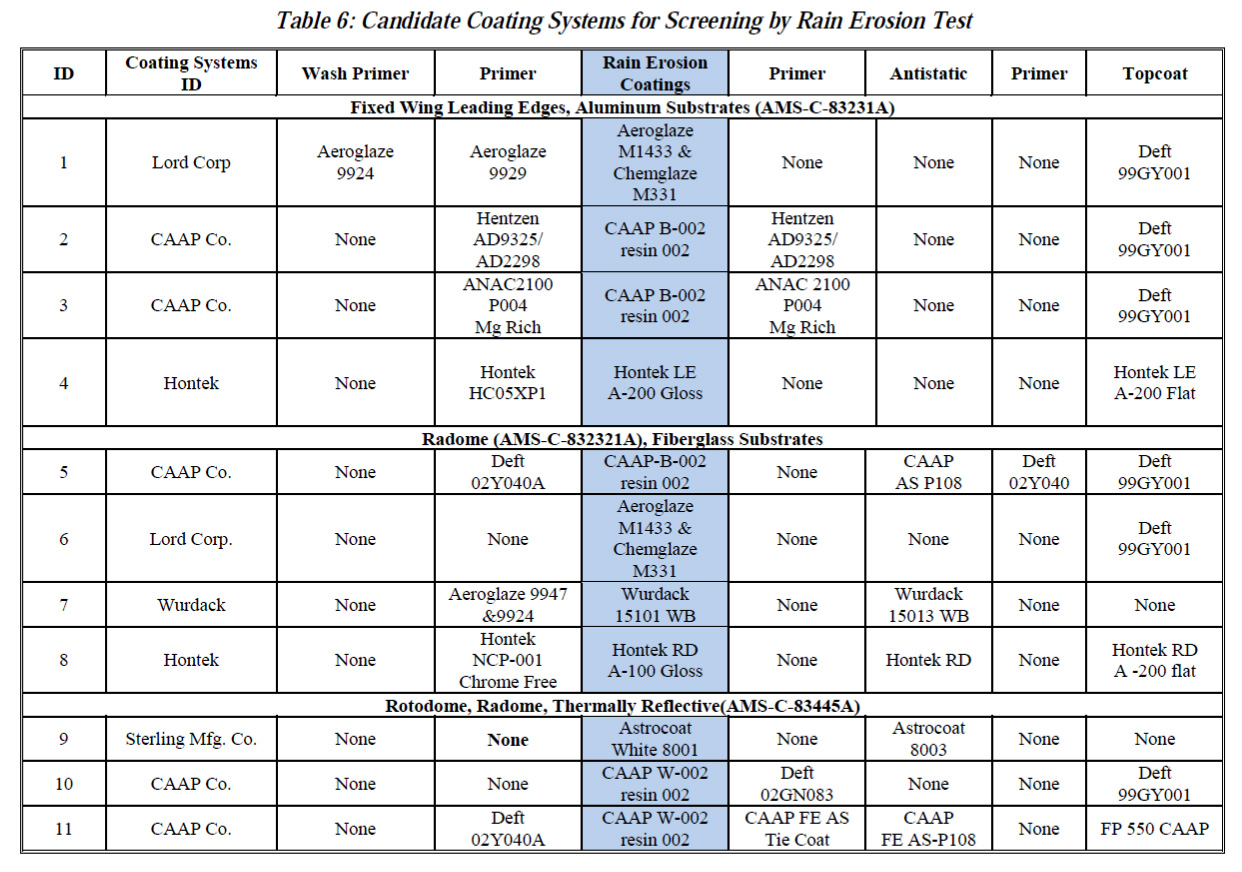 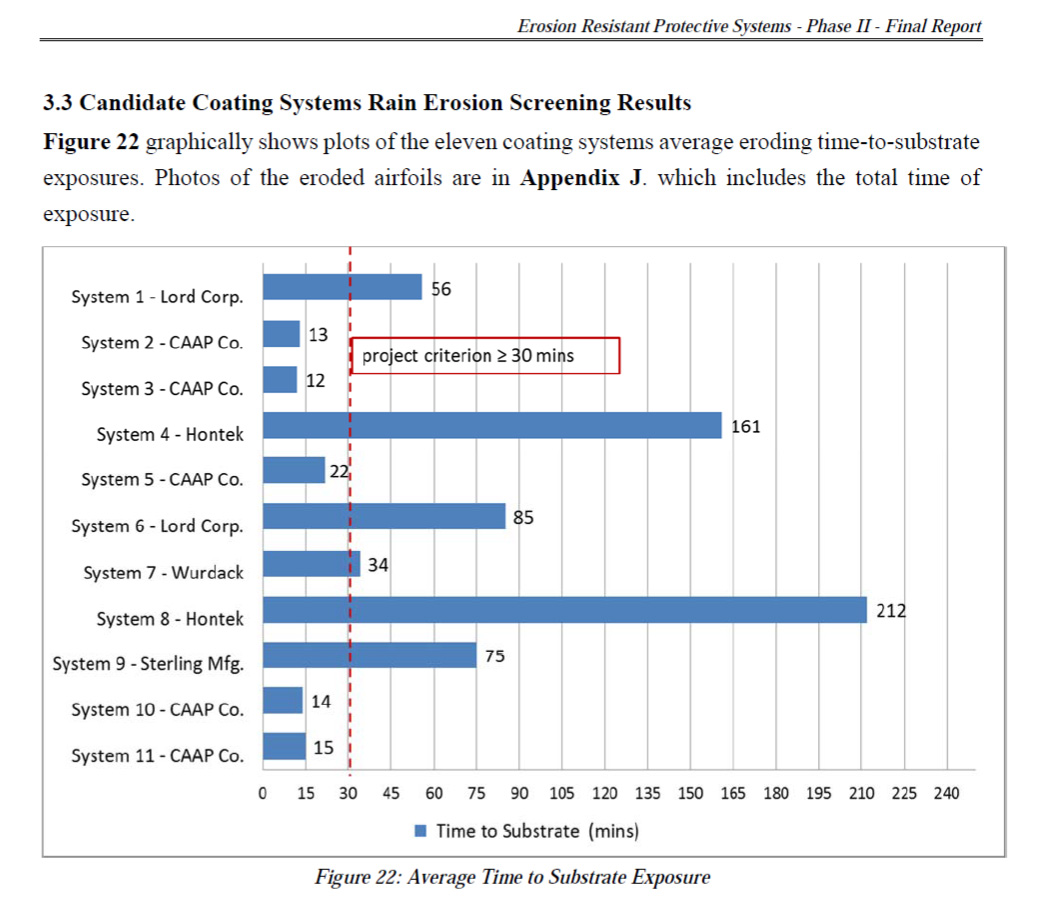 3.4.10 Reversion Resistance
Qualitative and quantitative results for reversion resistance tests are in Table 32 and Figure 32, with photographs of select exposed coated panels. Table 32 show the average percent polymer reverted for the coating systems after exposure to the high moisture and heat conditions in the steam autoclave. Appendix M provides all the detailed calculations for determining the percent polymer reverted for the tested coating systems. Systems 1 and 6 (Lord) materials yielded greater than 15 percent polymer extracted after hot acetone extractions. System 1 did not show any wrinkling with an averaged 31 percent polymer extracted, but small blisters were observed on the coated surface. When viewed under 10x magnification, the small aberrations can be seen from in Figure 32.

In System 6, the topcoat cracked (Figure 32(c)), which indicates adhesion loss from the rain erosion coating. The average polymer extracted was calculated at 40 percent. System 4 and 8 (Hontek) materials showed no change in appearance after exposure and no polymer was extracted. System 4, for leading edge application, is in Figure 32 (b).

System 9 (Sterling) materials were tested previously in the reversion method development investigations and performed poorly. Acetone extraction was not performed due to the severe degraded condition of the coatings.

The preliminary proposed requirement for this method is coatings shall not wrinkle, crack, or soften after steam autoclave exposure and a percent polymer preferred a detriment to buy acetone extraction should not be greater than 15 percent. 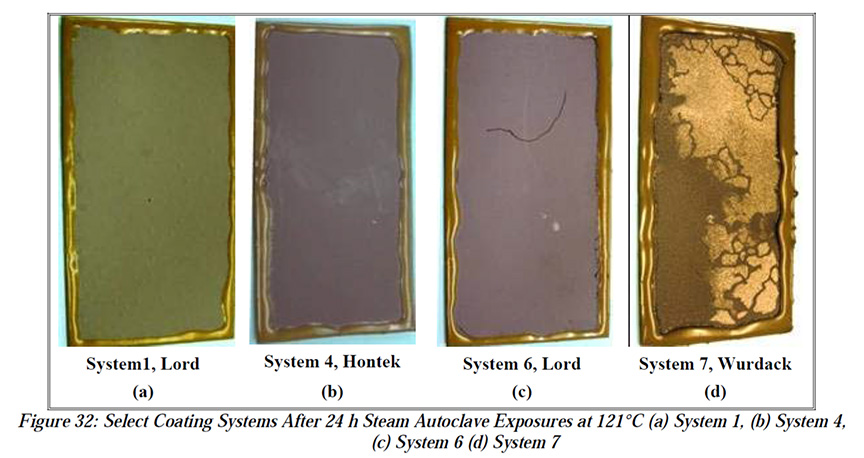 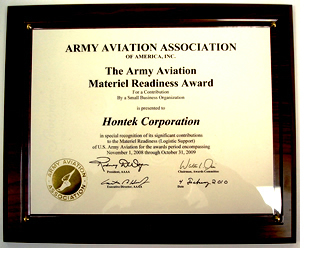